"Painting, and often writing about my experiences in the moment, has since become my medicine."

Tom shares a poem about his experiences of depression and tells us how art and poetry have been an important part of his mental health journey. Read his story here. 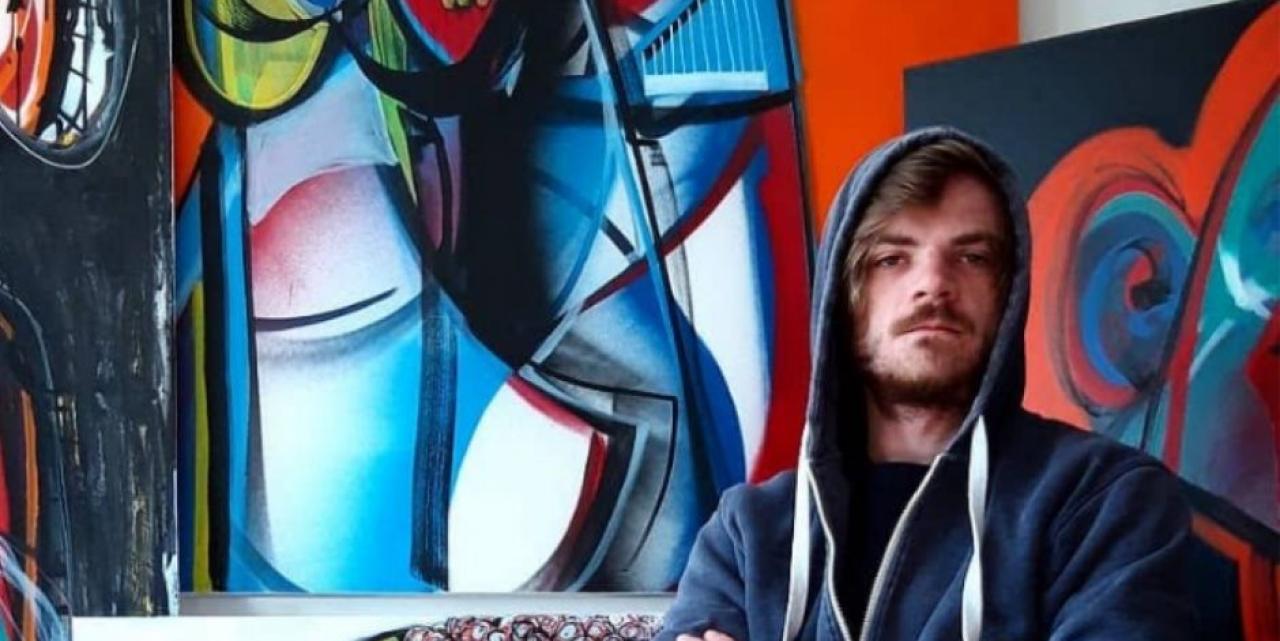 My name is Tom, these days, I’m an artist and poet, but before I began painting and writing about my experiences, I endured a long career in the hospitality industry.

I started working very young after my home-life took a turn for the worst and I ended up homeless and couch surfing until I found my first job as a kitchen porter.

At 17, with very little to show the world, I jumped head-first into a career that would hopefully bring me security. I did quite well, and by the time I was 22 I was the Head Sommelier for a luxury restaurant in the city of London. Yet despite my relentless efforts to create financial security for myself and make headway in a thriving industry, I built no foundations or social networks, working tirelessly every weekend, birthdays, Christmases, and New Year’s with no time for family or friends. At 23 I began contemplating suicide as a very viable solution to my problems, the sense of loneliness was all-consuming, and I felt stuck with no escape and no one to share my anxieties with.

At 24 I had a mental breakdown while at work and collapsed for the second time after a stress-induced panic attack.

I was diagnosed with depression after visiting a doctor to help find the source of my anxieties and existential thoughts. Shortly after that, I began painting and realised how beneficial it was for my peace of mind. It did more for me than therapists ever seemed to achieve (post-diagnosis). I was lacking a sense of satisfaction and self-esteem that being lost in the present with my paintings seemed to deliver so naturally. Painting, and often writing about my experiences in the moment, has since become my medicine. It is a cathartic process that helps me keep a balanced and uncluttered mind. It’s extremely replenishing. Whilst I’m not a mental health expert or would never advise on others medically, mental health has become the central context of my work, and I have found sharing my subjective experiences of depression has helped others feel relatable and understood, and it has certainly helped my own wellbeing.

So that being said, I will always advocate for the use of creativity as a tool to tackle personal anxieties and traumas.

I wrote the following poem only recently in February 2021. Sometimes depression takes over my mind in a matter of hours, and this was one of the occasions I felt it creeping in, which doesn’t happen all the time. It was what you might refer to as “the beginning of a low tide”. I still don’t know what my triggers are sometimes, but writing about it when it happened allowed me to reflect and be aware of what was happening, and maintain my composure as I began to feel a sense of hopelessness.

The burdens of my heart came for me today.

Heavy chains alive like snakes,
Slithering past my defences.
Growing pains and mental breaks,
Engulfing all my senses.

They were stuck outside the door all night, trying to come in.

I heard them scream for my attention,
Using me as leverage.
Disarming suicide prevention.

In silence with the Devil's beverage,
I held ground and listened as they hissed from the other side.

Creatures who devoured the sun,
Coming for my scars.
Memories that made me run,
And put me behind bars.

I could only stay awake so long, fighting off the pressure.

I did what I could but fell and slept,
Eventually I had to cave.
That's when they slalomed in and crept,
Binding me like a slave.

Now the black fog has consumed me.

The burning reminds me of therapy.
When I woke up I knew I had lost.
Thought of pills I could be popping as remedy.
But sober fights come at a cost.

A dark angel tried to seduce me with them once.

But I chose to retain my emotions,
See the world for what it truly is:
Dying dreams and faded oceans
And a mind that is cruelly his.

“Fitness is not just physical, it is mental as well."

Head of Social Enterprise at Mayfield Nurseries, Dan Angus, explores the messaging around connecting to nature, how it can be difficult for some and offers some tips for helping to get you started.

Gaming and my mental health

Playing video games where we can live in a world that we control, without the worry of Coronavirus, can let us forget the gloom of reality and enjoy a space where we’re free to explore, meet friends and be creative.